New York’s Marriage Equality Law: A Hopeful Landmark for All of Us 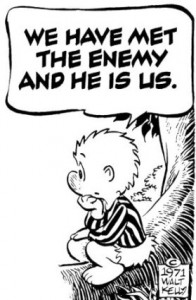 We Have Met the Enemy and He is Us

“We have met the enemy and he is us.” Thus spoke the cartoon character Pogo, many years ago. The history of mankind seems to be the story of the infinite variety of ways that we create enemies, and distinguish “us” from “them,” thus justifying excluding, demeaning, dehumanizing and otherwise doing unconscionable things to “them.” We have reduced our shared humanity by having made discriminatory distinctions on the basis of race and gender and language and religion, and geographical origin, and nationality and height and weight. The list goes on. Congratulations to the people of new New York State for declaring that one’s choice of relationship partner, sexual partner, lover, will no longer disqualify any person from marriage. Gay New Yorkers, who have never been enemies to anyone, have now, finally, been recognized as part of “us”. They now have the same right as every other New Yorker to be happy or miserable, and struggle with the complex processes of marriage to the person they love. We have determined that marriage is no longer a heterosexual right, but a human right. Maybe we are growing up. At least, on this occasion of the passage of New York State Bill A8354-2011, New Yorker’s collective humanity has taken a giant step up. Hooray for “Us.”

This entry was posted in Uncategorized. Bookmark the permalink.